Behold #XppGroupies! The day we’ve been waiting for has come! The Azure-hosted builds are in public preview with PU35!! We can now stop asking Joris when will this be available because it already is! Check the docs!

I’ve been able to write this because, thanks to Antonio Gilabert, we’ve been testing this at Axazure for a few months with access to the private preview. And of course thanks to Joris for inviting us to the preview!

What does this mean? We no longer need a VM to run the build pipelines! Nah, we still need it! If you’re running tests or synchronizing the DB as a part of your build pipeline you still need the VM. But we can move CI builds to the Azure-hosted agent!

You can also read my full guide on MSDyn365FO & Azure DevOps ALM.

Remember this is a public preview. If you want to join the preview you first need to be part of the Dynamics 365 Insider Program where you can join the “Dynamics 365 for Finance and Operations Insider Community“. Once invited you should see a new LCS project called PEAP Assets, and inside its Asset Library, you’ll find the nugets in the Nuget package section.

Compiler warnings. Warnings. They’re not errors, only warnings. You can just overlook and forget them, right? Well, I hope you aren’t.

“But even the standard code done by Microsoft throws warnings!”, you could say. And that’s true, but that’s not your code, it’s Microsoft’s. If a functionality you’re using breaks because they didn’t care about their warnings, you can open a support request and it’s Microsoft’s job to fix it. If your code breaks some functionality because you didn’t care about a warning, it’s your job to fix it, and your customer will want it as fast as you’d want Microsoft to fix their error.

That’s why we should be warned about warnings (badum tss).

With the latest Dynamics 365 for Finance and SCM 10.0.10 version, we’re getting a new feature that will allow us to add actions to the message bar, using the Messaging API like we used to do in AX2012 with the SysInfoAction class.

Since Microsoft Dynamics 365 for Finance & Operations is a cloud-based ERP we cannot work with files on the AOS drive anymore. It was pretty usual to have file-based integrations in AX where you got a file in a folder and processed it.

Of course it’s still possible to work with files, for example from a storage account on Azure like Miquel Vidal has shown in his blog (in Spanish) or with the Recurring Integrations Scheduler tool.

Most of the functionalities that consist in uploading of downloading a file is MSDyn365FO use .NET Streams, usually its child class MemoryStream.

So, how do we unzip one of these files? For example, the ISO20022 vendor payment journal file is zipped. What if we need to access the XML file contained in the ZIP?

We’ll need to use the ZipArchive class from System.IO.Compression namespace, and it’s really really easy. For example:

Edit: this code is valid for a single file ZIP. If the zipped file contains more than one file you must process each Stream inside the while.

We need to copy the unzippedStream stream (which is a DeflateStream) to a MemoryStream (which must be initialized) before returning it.

Remember that to access a .NET collection we need to use an enumerator to loop through it. If you don’t see the methods in the lookup using dot notation just write them, writing .NET code in X++ is still a bit buggy…

When you add a field to a SysOperation Framework Data Contract the lookup that the framework creates (if the EDT has a lookup) is a simple, single select lookup. Let’s see how to create a multi select lookup in MSDyn365FO.

The SysOperation Framework and MVC

But first of all a bit of an introduction! The SysOperation Framework was introduced in Dynamics AX 2012 to replace the RunBase Framework, and is used to create processes that will be run by the batch server. The RunBase classes are still around in Dynamics 365 for Finance and Operations. Some standard processes still use it while others use it to later call a SysOperations Framework class.

As you might know MSDyn365FO’s data access layer pretty different from T-SQL. This means that if you copy a query on AX and paste it in SSMS it won’t validate in the 99% of the cases (the other 1% being a select * from table).

I’ve already written some posts about development Application Lifecycle Management (ALM) for Dynamics 365 for Finance and Operations in the past:

The possibility of doing real CI/CD is one of my favorite MSDyn365FO things, going from “What’s source control?” to “Mandatory source control or die” has been a blessing. I’ll never get tired of saying this.

Some time ago I had to create an interface between MSDyn365FO and a web service that returned data as XML. I decided to use X++’s XML classes (XmlDocument,  XmlNodeList, XmlElement, etc…) to parse the XML and get the data. These classes are terrible. You get the job done but in an ugly way. There’s a better method to quickly parse XML or JSON in MSDyn365FO.

Feature management has been around in Microsoft Dynamics 365 for Finance and Operations for some time now. Before that features were enabled through flighting running a SQL query on dev and UAT boxes (and the DSE team would do it on production).

Now we have a nice workspace showing all the available features and flighting is still around too. The main difference between flighting and features is that flighting is enabled to a selected group of customers, like a preview of a feature.

Unless you’ve been working for an ISV there’s a high percentage of probabilities that you’ve never cared about Dynamics Best Practices (BP), or maybe you have. I haven’t worked for an ISV myself but back when I started working with AX I was handed the development BP document and I’ve tried to follow most of them when writing code.

But BPs could be ignored and not implemented without any issue. This is why Microsoft will publish…

Application Checker is a tool that will change that. It will force some rules that our code will have to meet, otherwise the code won’t compile (and maybe won’t even deploy to the environments).

We got an advance of it during last MBAS session “X++ programming with quality” by Dave Froslie and Peter Villadsen. Unfortunately the session wasn’t recorded.

App checker is built on BaseX, an XML analysis tool, and powers Socratex which Microsoft uses to track code quality. I don’t know if Socratex will be publicly released and I don’t remember if this was clarified during the session.

The set of rules can be found in Application Checker’s GitHub project and it’s still WIP. I think there’s loooots of things to decide before this goes GA, and I’m a bit worried and afraid of some of the rules 😛

There’s different types of rules, some will become errors and other warnings. For example:

ExtensionsWithoutPrefix.xq: this rule will throw an error avoiding your code to compile. It checks if the extension class has a name ending with _Extension and an attribute ExtensionOf. If it has it must have a prefix. E.g.: if we extend the class CustPostInvoice it can’t be named CustPostInvoice_Extension, it needs a prefix like CustPostInvoiceAAS_Extension.

SelectForUpdateAbsent.xq: this rule will throw a warning. When there’s a forUpdate clause in a select statement and no doUpdate, update, delete, doDelete or write is called later it will let us know.

As of today, there’s 21 rules in the GitHub project. You can contribute to the project, and you could enforce your own rules without sending them to the project on your dev boxes, just add them to the local rules folder. I’d create a rule that makes the space after an if/while/for/switch mandatory and throws an error otherwise, but that’s only a bit of my OCD when writing/reading code.

Try it on your code

We can already use Application Checker on our development environments since PU26, I think. We just need to install JRE and BaseX in the dev box and select the check when doing a full build.

Taking this as an example, a dumb one but ignore it, just look at the amount of different paths that could happen:

The rule also checks for the indentation depth, failing if it’s greater than 2. In the end the purpose of both rules is to try to cut up long/large methods, which will also help in enabling more extension points in different places of our logic, like Microsoft did with Data Provider classes for reports. 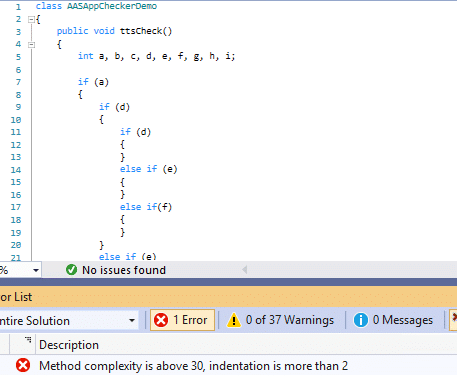 This one gives me mixed feelings. The rule checks that the ttsbegin and the ttscommit of a method are in the same scope. So the following is not possible: 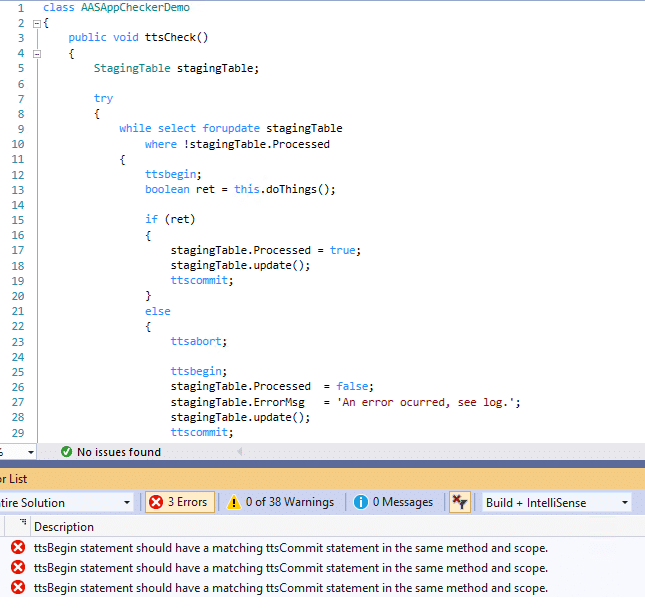 Imagine you’ve developed an integration with an external application that writes data to an intermediate table in MSDyn365FO and you process all pending data sequentially. You don’t want to throw an error if something goes wrong because you need the process to continue with the following record, so you ttsabort the wrong line, store the error and continue. If this is not possible… how should we do this? Create a batch that creates a task for each line to process?

Plus, the standard models have plenty of ttscommit inside if statements. 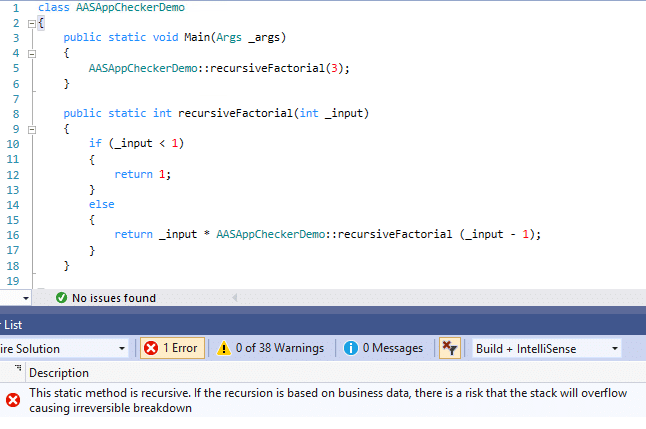 This rule will block the use of recursion on static methods. I don’t get why. Application checker should be a way to better coding practices, not forbidding some patterns. If somebody gets a recursive method to prod and the exit condition isn’t met… hello testing?

Will this force developers to code better? I don’t think so, but that’s probably not Application checker’s purpose. For centuries humans have found ways to bypass rules, laws and all kinds of restrictions and this won’t be an exception.

Will it help? Hell yes! But the best way to ensure code quality is promoting the best practices in your team, through internal trainings or code reviews. And even then if someone doesn’t care about clean code will keep on writing terrible code, which might work but won’t be beautiful at all.

Finally, I’m not sure about some rules, like avoiding recursion on static methods or the tts thing. We’ll just have to wait and see which rules make it to the final release and how will Application checker be finally implemented in the MSDyn365FO application lifecycle by blocking (or not) the deployments of code which doesn’t pass all the checks or if it will be included into the build process.